Now that we were both on board for wanting the house, I had a phone call to make.

I'm going to go out on a limb and guess that, unless you found this post by searching USDA auctions...you've never bought a house through a USDA auction.  I mean, yes, they happen, but it's kinda rare.  I mean, when we started looking at this house there were a total of EIGHT in my whole state.  I live in a VERY populous state.  Currently, there are ZERO.  So, yes, it happens, but no it's not common.

Why does this matter?  Well, the house was being auctioned through the USDA.  Yes, the same USDA that makes laws concerning farmers, puts out dietary guidelines, and approves food labels...also gives out loans...for houses. We were kinda shocked, too.

Turns out USDA loans are given out to homes in rural communities to people who have less than perfect credit and fall within a lower income category.  I'm not sure all the specifics, but it's to help build up farming communities.

Well, the previous owners defaulted on the loan, so now it was for auction.

Years ago, my brother in law heard of a house for auction in town.  He decided how much he thought it was worth and I think may have even gone prepared to bid that amount.  When he got there, however, it turned out to be a Sheriff's tax auction with an upset bid from the bank.  The house he thought was worth about 30-40 grand went for around 80,000.  If you look up Sheriff's auctions, you can read a little more about how they work.  But, that was before everyone used the internet to look up all the things...no I'm not THAT old, lol. 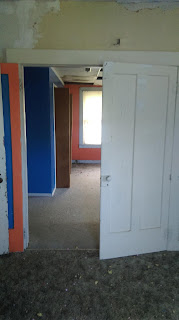 (The front two bedrooms have doors that open up.  It could be one big room if you wanted.)


The only experience I had with housing auctions was from his story, and one private auction that also had a starting bid of higher than it was worth.  This made me leery of what price the house might sell for, and I didn't even know if it was worth moving forward. We didn't have a huge budget, and the house needed a lot of work, so the price we could pay was even smaller. If there was an upset bid, we needed to know what it was.

There was a sign in the yard that said it was a USDA auction and gave the date.  It also gave the open house dates.  We had gone to the open house with a list of questions.  But, as it turns out, they didn't stay for the open house.  The host just opened the door and left.  She came back later, but we missed her.  So, I had to call. 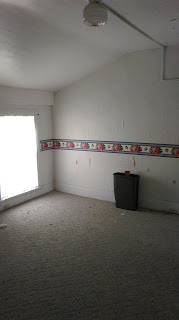 (A bright and sunny small room. Perfect for a schoolroom.)


The paper for the house said that the USDA would bid $100 on the property.  Really? It could start at $100?  I had to understand if that was really the case.

There were no banks involved.

USDA was the only one going to bid on the house.

Any other bids would just be from interested parties.

There were no upset bids.

Taxes were up to date.

Only that year's taxes would need to be paid by the buyer.

I must have asked her the same question three or four different ways to verify what I had heard.  I was so excited, but could hardly believe it.  The price would be determined by the bidders.  That meant it should go for what it was worth and not a crazy upset bid amount. That meant it could go really cheap.  That meant, it could be in our price range.

That meant another prayer had been answered!